skip to main | skip to sidebar

Cannot anything be EZ?

TLDR: See my rule of thumb at the end of this post.
I absolutely hate that meteorologists have now decided that the amount of moisture in the air should be reported in dewpoint rather than in relative humidity. Prior to the 1990s, the dewpoint was considered an arcane and generally useless data point for public reporting. Relative humidity was widely used and reported and the general public had an instinctive understanding of the impact of any given relative humidity number reported. For some reason, which I’ve not yet been able to fathom, the ‘experts’ determined during the last decade of the last century that reporting the dewpoint would be more helpful than reporting relative humidity. Why and how?

Warm air can hold more water vapor than can cold air. Thus the relative humidity (RH) in a given environment can change with temperature with no change in the amount of water vapor being held in the air in that environment—RH is a relative measure, not an absolute measure—as indicated by the naming convention used. So, if an RH of 50% is reported at 70 degrees Fahrenheit (F), the RH will be lower if the temperature increases to 80 F with no change in the amount of water vapor in the air. Regardless of that, if the RH is 50%, we know that the air is holding half of the water vapor that can physically by held by the air at that given temperature regardless of what that temperature is. Given an RH measurement and a temperature, we could calculate the RH for any other given temperature assuming the physical amount of water vapor remains constant. Most people are comfortable at 30% to 50% RH. Above those values, and certainly at and above 70% RH, most people note that the air feels ‘clammy’ or ‘sticky.’ This human perception of moisture in the air is irrespective of temperature. An RH value is easy to understand. Humans generally like that 30% to 50% RH—and here’s the key point—REGARDLESS OF ACTUAL TEMPERATURE. 80 F and 30% RH is comfortable. 80 F and 80% RH will feel sauna-like. On the other end of the scale, 80 F with 3% RH will feel like you are in an oven.  30 F and 30 % RH may not be comfortable (because it’s cold) but 30 F and 80% RH is going to feel even worse.

The dewpoint (dP — not to be confused with DP) is the temperature at which the air has been sufficiently cooled such that the RH at that cooled temperature would be 100% assuming no change in the amount of water vapor physically in the air. Remember that warm air can hold more water vapor, thus, by inference, cool air must hold less water vapor. As the temperature drops to and below the dP, there will be condensation of moisture out of the air resulting in dew, or frost, depending on the air temperature.

So, the TV weatherman, probably a Certified Broadcast Meteorologist—a credential governed by the American Meteorological Society, reports the conditions with a dew point of 40 F. Or 65 F. Or 30 F. So what? What does that even mean? What I want to know is, how wet, how sticky is the air. Reporting the dP sort of tells me. A higher dP means more water in the air and thus more stickiness. But, how much is how much? How do we interpret a dP reading into practicable and actionable knowledge?

In reading information from the American Meteorological Society, they explain that a higher dP will generally be less comfortable. OK. Higher than what and less comfortable than what? If the air temperature is 80 F and the dewpoint is 50, will that be comfortable? Does anybody know? Can the dP be too low for comfort? What if it’s the same 80 F and the dP is 12 F? Is that going to be comfortable? How the hell do I know? Is there a chart somewhere that tells me what dPs provide human comfort at a range of temperatures? If there is I’ve not found it.  Here is what I did find courtesy of Wikipedia. EZ? I think not! 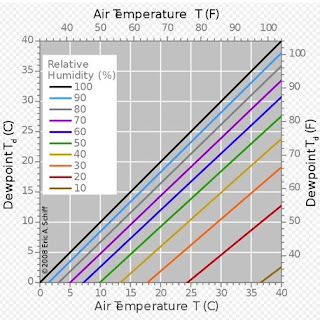 Chart by Easchiff - Own work
CC BY-SA 4.0, https://commons.wikimedia.org/w/index.php?curid=3334334
So, after spending some time with the chart above and doing some calculations in Excel, here's my rule of thumb: If the dP is more than about 20 degrees cooler than the current temperature, the RH is probably within the comfort range.
Posted by EZ at 5:40 AM

Where our current legislature SHOULD meet.

EZ
Mesa, AZ, United States
Born in Idaho. Matured in Texas. Ripening in Arizona. A middle of the road kind of guy. My walls: beige. My ice cream: vanilla. Boring? I'm not bored!