skip to main | skip to sidebar

Reminiscing is EZ; International Travel, not so much.

A question posted to Quora asked: “Have you, as a U.S. citizen, ever been denied entry to another country?”  Well, pull up a chair, children. I've a tale to tell:

Oh, yes! In 1990 I was living in Okinawa, Japan, working for the U.S. Military as a health-and-safety specialist. We provided consultative services to all U.S. organizations (military, State Department, Health and Human Services, etc.) located anywhere on the western edge of the Pacific Rim area from Alaska to New Zealand. We received a call from the U.S. Embassy in Jakarta, Indonesia for some assistance. I was tagged to make the trip. At this time the only passport that I had was a 'red' U.S. official passport — I had used that for all official travel for two years with no problem — it is what the U.S. Government, as my employer, had issued me. What I didn’t know was that Indonesia, at that time, did NOT recognize the U.S. official passport. All entry by U.S. citizens into Indonesia had to be with the standard 'blue' passport, with, at the least, an airline-issued visa. As I said, I didn’t know. But the good folks from the U.S. embassy in Jakarta knew. They also knew that I would be traveling with my red passport and didn’t bother to tell me about this little ‘detail.’ My transit from Naha was on Northwest Airlines, and *they* didn’t object to my routing and travel documents, either. 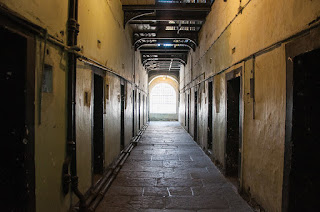 Photo by Wendy on Flickr. Used under Creative Commons License.

On my arrival at the customs and immigration desk in Jakarta, the immigration official, dressed in olive drab green military fatigues, took my passport, eyed it, then me, then it, then me…and loudly blew a big chromed whistle hanging from his neck. Looking up I saw two military uniformed men with semi-automatic-looking rifles hanging from their shoulders approaching rather rapidly. The man at the desk handed my passport to one of the military men and told me, “Go with them!” Well, what could I do? With one of the military men on either side of me, we proceeded to walk down the sloping floor of a long hallway away from the arrival area. This was distressing. This was pre- TSA and I’d never been treated like this. Even the facility seemed to echo doom and gloom with sickly yellow sulfur gas-discharge lamps overhead, dark and unpleasant colors on the concrete walls, and a black non-skid rubberized flooring surface. Visions of a dismal, damp concrete-and-steel cell swam through my mind. Ahead I could see large automated glass doors and beyond that a crowded arrival plaza.

As we approached the doors they slid open and, I swear, Agent K and Agent J from Men in Black, suits, ties, sunglasses and all, exited a big black Chevy Suburban and swept quickly into the building. Of course, it couldn't have been Agent K and Agent J. This was seven years before Men in Black was available for viewing. They approached the two Indonesian military men (the guys with the rifles) and began a rapid conversation in Indonesian, I assume. The conversation got a bit heated, with the sunglasses guys doing quite a bit of gesturing and head nodding. Finally, the taller of the sunglasses guys put an arm around the shoulder of one of the Indonesian military men and led him a few paces to the side—their conversation continued in a muted mumble for a few moments. Then the mood lightened and head-nodding seemed the new norm for the four of them. The taller of the sunglasses guys (Agent K?), now with my red passport in his hand, turned to me and said, in English, “Come with us”. Out the glass doors and into the back seat of the black Suburban we went.

As we drove away Agent J says, “Relax. We’re from the U.S. Embassy and we're taking you there.”

So it was. I was taken to the embassy compound and introduced to the people I’d be working with for the next few days. They told me I was in the custody of the U.S. Embassy staff rather than in an Indonesian jail as a courtesy to the U.S. extended due to goodwill by President Suharto. The embassy official made it very clear that I was not, under any circumstances, to leave the embassy compound. Well, not too tough. I was escorted to a deluxe room near the embassy restaurant and club, poolside. There I found that all the creature comforts of a tropical resort were available for me in my off-duty time. Off duty staff, spouses, and family were relaxing around the pool outside my door. Some were being served exotic cocktails by white-coated wait staff. My luggage and professional equipment were already in my room. Not a bad way to spend a workweek.

When my work was done with the embassy’s medical staff, I got a ride in the black Suburban back to the airport where I was escorted by the two sunglassed agents into the custody, again, of armed uniformed guards. The guards took me to the outgoing customs/immigration desk where the officer there stamped my passport with the date and, in bright red, the words, “DEPORTED—REENTRY DENIED; DIUNDANG—DITENTUKAN.” I caught my Northwest Airlines flight back to Okinawa and found I’d been upgraded to international business class. I had not requested an upgrade.

So, this is how I got deported from Indonesia. It still irks me that the embassy staff there allowed me to walk into the situation unaware. In 1990, the internet was in its infancy, and it wasn’t so easy to research State Department advisories and travel information on the various countries. I had depended on the travel staff in Okinawa, the airline, and my U.S. Embassy hosts to let me know what I needed to know. In the end, they took good care of me, but I’ve got to admit to being a bit frightened as I was led away from the immigration clerk’s desk. Thanks, men in black, for keeping my week in Indonesia safe!

Where our current legislature SHOULD meet.

EZ
Mesa, AZ, United States
Born in Idaho. Matured in Texas. Ripening in Arizona. A middle of the road kind of guy. My walls: beige. My ice cream: vanilla. Boring? I'm not bored!